Even though I've been writing article about photography for over 4 years, I've never written any equipment reviews. And why should I? There are far better equipment experts, technical fanatics, pixel-peepers (I mean that in a good way!) and gear enthusiasts than me out there. My fields of expertise are different, and my writing consists mostly of photographic vision, composition, the philosophical aspects of photography and so on. I intend to keep this line of writing, and for the most part, I'm happy to leave the equipment reviews to the experts.

That said, after shooting with the Canon 11-24mm F4L for a few months, it has proven to be such a game-changer that it has altered how I think about composition. And in a more general sense, my ability to take control over what is included in an image, and how these elements are arranged. 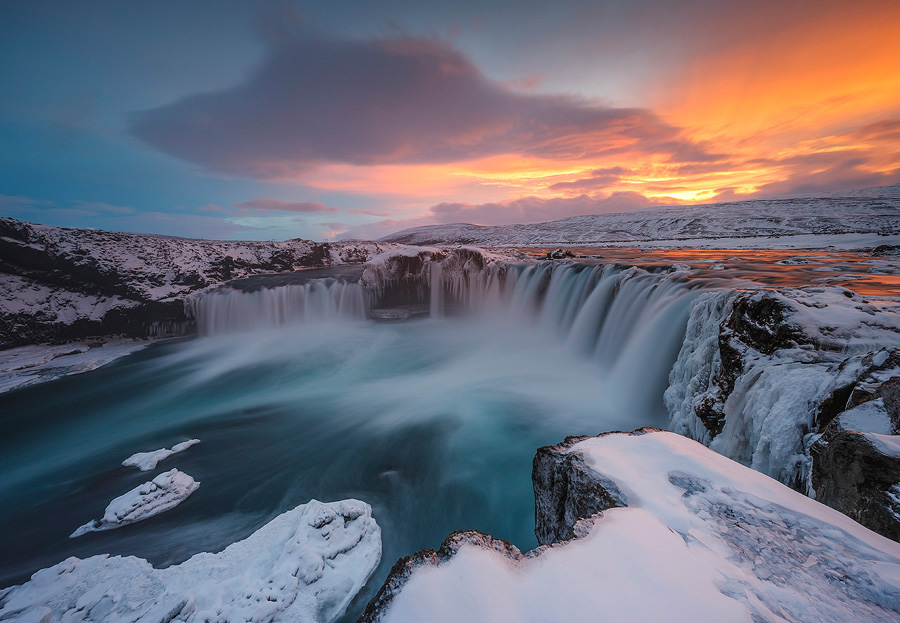 This will not be your regular gear review. I won't be discussing sharpness (although trust me that this lens is very sharp), chromatic aberrations or barrel distortion. I will only be talking about composition, which is, in my opinion, the single most important ingredient to a successful photograph. I will present some images and explain what about the 11-24mm made them possible. I'll talk a bit about the downsides of this lens and the solutions to the problems it presents.

So why? Why does a landscape photographer need an 11-24mm? Isn't it just too darn wide? Is 11mm worth the size and the monstrous weight? Is it worth the hefty price tag? I have to admit that before shooting with it, I was in serious doubt. I was sure I'll leave it in the bag most of the time, taking it only on rare occasions when 16mm wasn't wide enough. I thought that 16mm would be wide enough for 90% of my images, after all, I've been producing satisfactory shots until now - what good could a wider lens be?

I knew that when going wider, background subjects shrink significantly in size, which can hurt the composition. Moreover, in cases where 16mm wasn't enough, I had a 14mm f/2.8 which was excellent for night photography and for shooting in confined spaces.

It turns out that I was wrong. The extra width proved to be extremely useful, much more than I had imagined. It allowed me to have much more control, to include more sky when I wanted to, to get closer to the foreground, to reveal more detail and create a greater sense of depth and more dramatic imagery. Let's look at some examples. 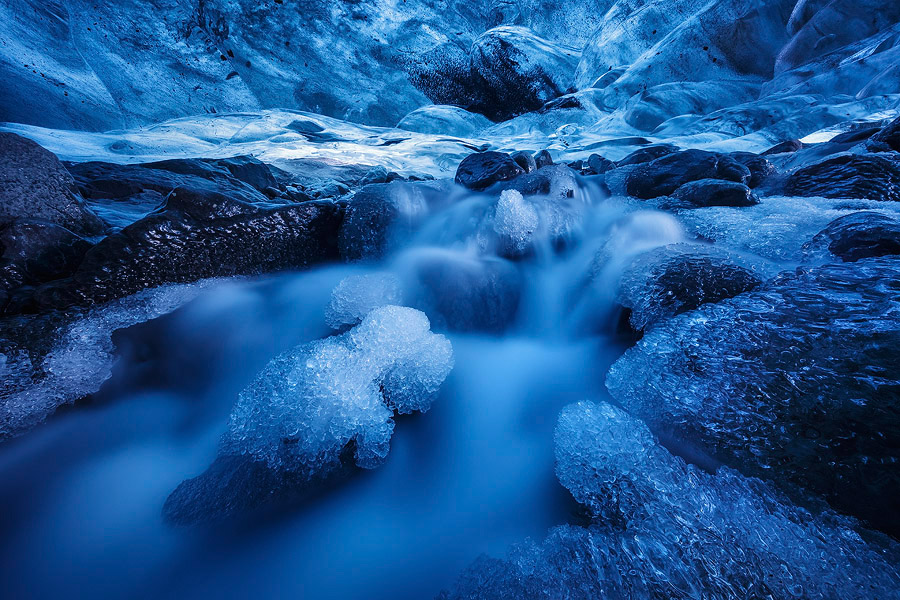 The ice cave pictured above was magnificent, but it was also very cramped. I couldn't walk upright in most of the spots I shot, and this stream was very small. The ice-crusted rock in the middle was tiny, and its details were so beautiful, I needed to get close in order to expose their intricacies. On the other hand, I needed to frame the different elements well, and in a balanced way that makes visual sense.

The cave's ceiling is extremely important, since it's the only subject of the frame which is part of the glacier, which basically IS the ice cave. It also contains wonderful melting patterns, and black, volcanic earth which gives extra texture and detail.
On the bottom of the frame, there are two important elements: the ice-crusted rock in the middle of the stream, which is most definitely the centerpiece, but equally importantly the ice crusted banks on the bottom right. These serve to create the frame to the blurred water and to compositionally counterbalance the rock and the left-running stream.

In addition to the compositional aspect, I strongly feel that including all these elements serves to give the viewer a better sense of being in this incredible cave. This might be the strongest advantage of utilizing such a wide angle of view.

Without a super wide lens, I could still have included all of these elements. I could have achieved this in one of several ways.

Firstly, I could have moved back a little. This would indeed allow me to include all the different desired elements in the frame, but going backward would change the perspective significantly, shrinking the most important elements in the process, namely the ice crusted rock and the stream itself. That would hurt the composition a great deal.

Alternatively, I could have shot a panorama, using a tilt/shift lens or by moving the camera and lens. This would make the job much, much harder, since (a) it would require multiple stitching in addition to the already-challenging focus stacking and (b) shooting so close to the stream meant I constantly needed to wipe the lens dry, and the extra shooting time would mean much more wiping, Photoshop work and general headache.

The 11-24mm allowed me to shoot this as close to the rock as I needed to, in order to include all the detail I wanted to show while still framing the shot as I desired, all with only three shots to focus stack. I simply wouldn't have been able to do that before I bought this lens.

Let's see another example from my Arctic trip earlier this year. 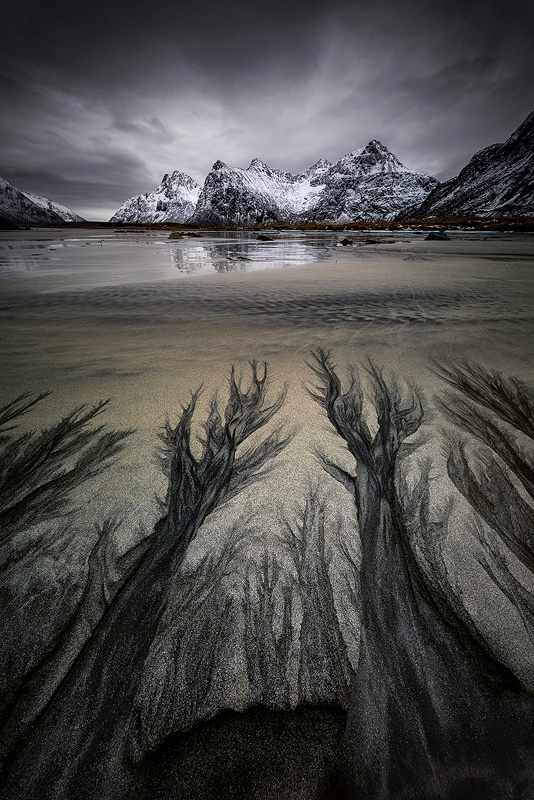 Again, this image would've been almost impossible without the 11-24mm, which allowed me to get very close and personal with the tree-like sand patterns, while being wide enough to shrink the background and include the whole mountain range in the frame.

The Lofoten Islands are full of fjords with towering mountains rising out of them. Some mountains are so close to a water body, it's extremely hard to include the entire thing in the frame without a truly wide lens. This is even more so when trying to include reflections. 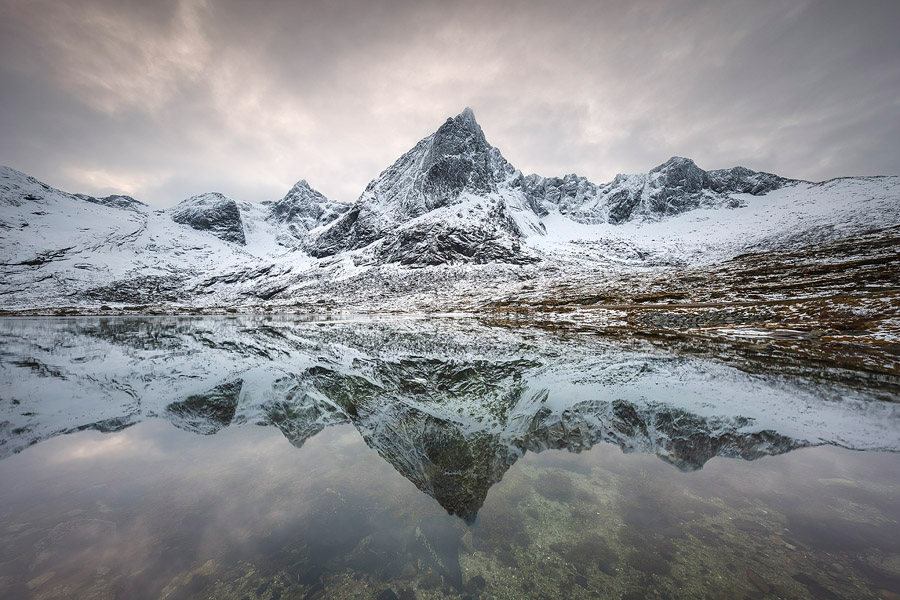 Last but not least, the 11-24 is an almost perfect tool for night photography. The maximum aperture of F4 is a limit, but then again, it's easier having the foreground in focus at F4, plus the monstrous angle of view allows one to expose marginally longer without getting the stars or Northern Lights blurred.

Let's see an example from an incredible night of Aurora in Lofoten. The super wide angle allowed me to include a huge chunk of the sky, showing the wonderful patterns and lines in addition to the mountains and the moving waves. I could also expose for 8 seconds, which is considered a bit long for this kind of strong Auroral activity. To be honest, the lights blew up a few seconds before I took this shot, and I should've exposed for less time, but the amount of blur is not a big issue and the Aurora is still well defined. 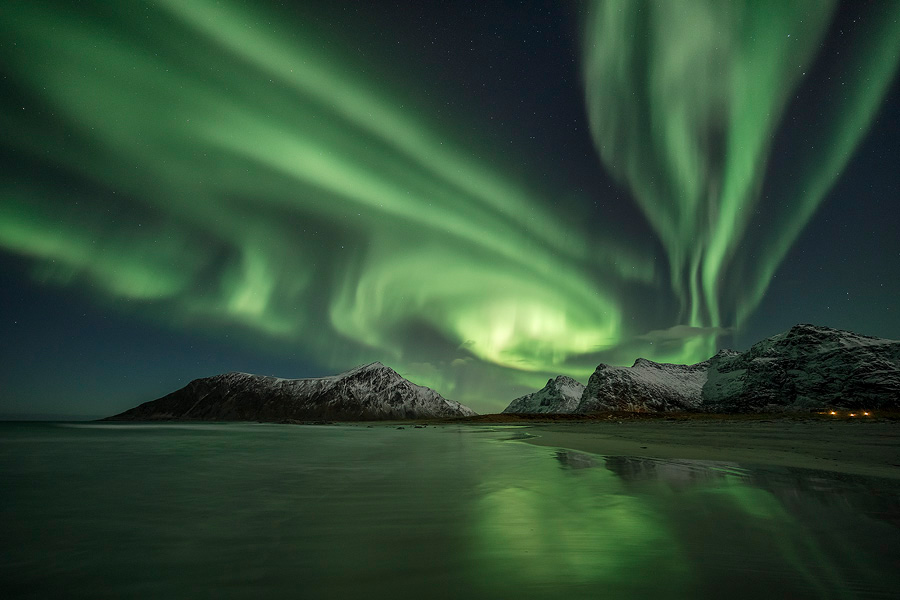 Here are a few more examples of Aurora shot with the 11-24mm. 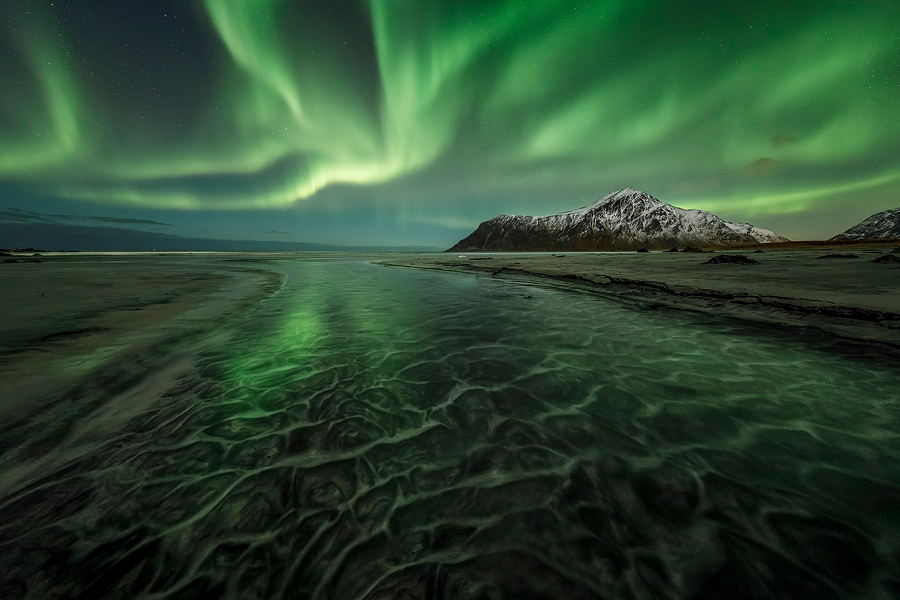 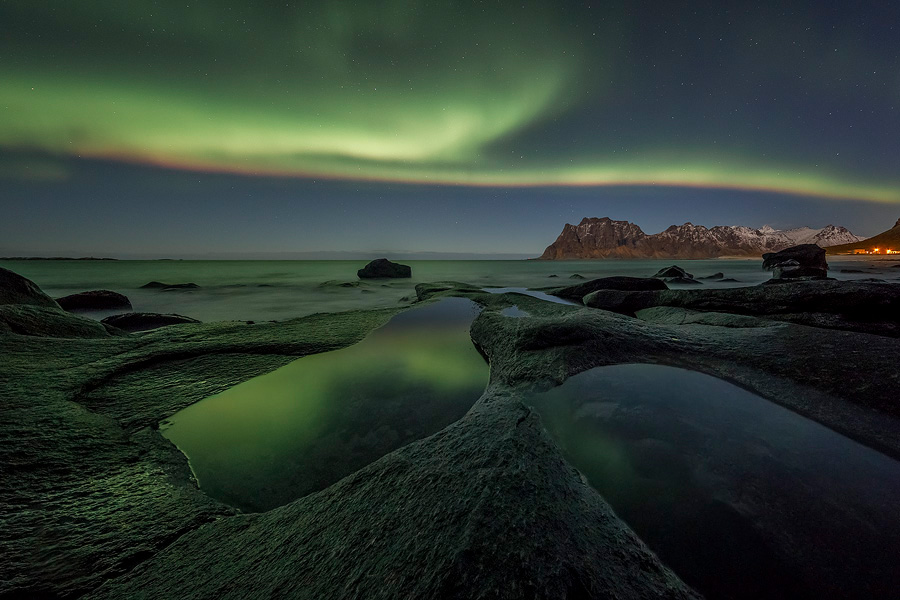 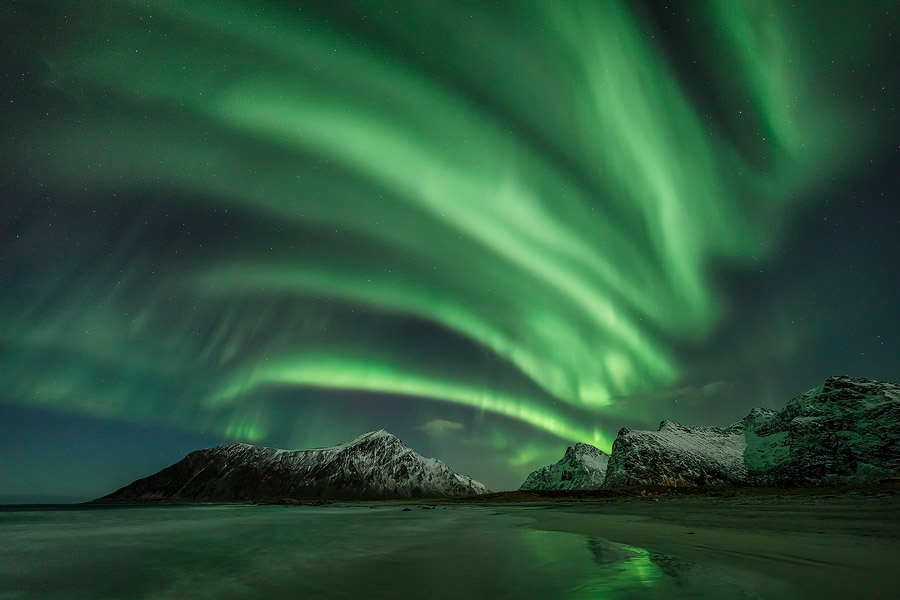 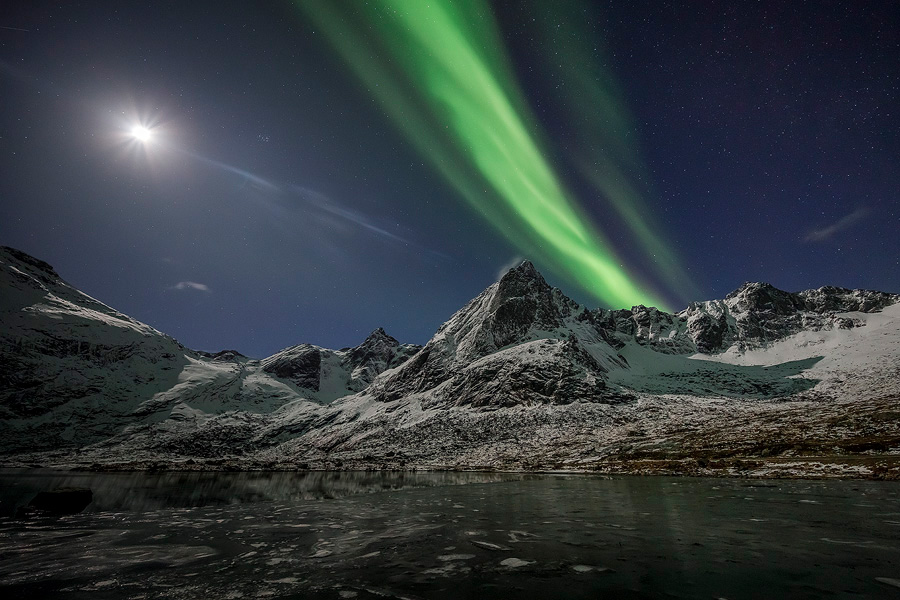 I hope you're convinced of this lens' advantages. What about the downsides?
For me, the greatest disadvantage is the inability to fit regular filters in front of the huge front element. I'm used to popping my 100mm system out of the bag and putting it in front of any lens. Not this one.

The only solution I currently know of which covers the whole width of this monster is the Nisi Filters 180mm system (proper disclosure: Nisi gave me the holder and some filters to try out). These filters are not cheap, but they are well made and have superb optical quality. The problem is that together with the mounting system, they are big and heavy, and don't allow a photographer to be as spontaneous as with a 100mm system. I still like the system very much and I've achieved good images with it. If you're into using filters with the 11-24, I highly recommend it.

As to the size, weight and price - simply put, it is what it is. If you need this type of lens, or if you can extract any type of value out of it, there is not much choice, is there? You need to weigh the advantages and the disadvantages and make up your own mind. You can also leave the lens at home if it's not really necessary or if the weight is too much for a specific project (for example, on my recent Patagonia hiking trip, I chose not to lug it around due to the weight, and opted for the lighter 16-35mm). In my opinion, the answer is clear: if you're an avid landscape photographer, don't wait - get this lens, you won't regret it.