Hell on Earth: Shooting in the Danakil Depression

Hell on earth. It sounds like hyperbole, but the Danakil Depression is exactly that. In late 2013 I spent 1.5 months traveling extensively in Ethiopia, and I visited the Danakil to scout locations for my 'Earth, Wind and Fire' workshop. It is, by my own experience, one of the most inhospitable environments you can actually visit. Scorching heat, no roads, no running water, not to mention hotels or any other modern convenience. But it is exactly these qualities which make the Danakil Depression one of the most fascinating places to visit on the planet. 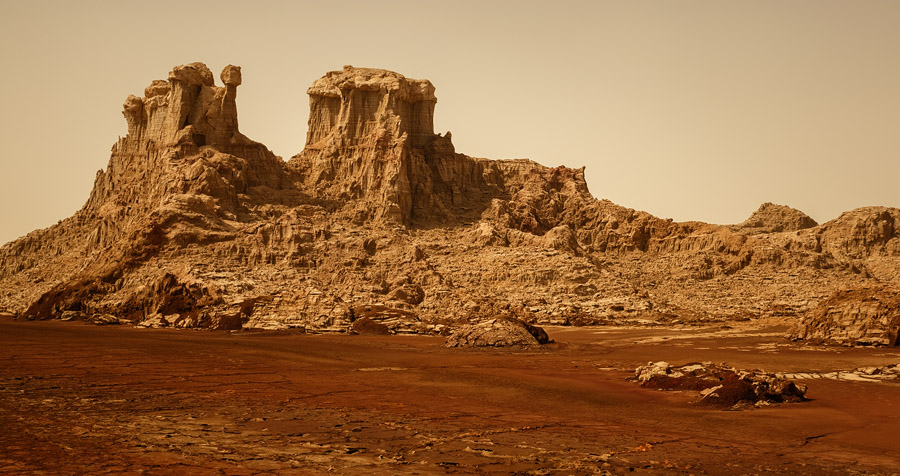 Located in the north of the Afar Triangle, a geological depression formed by tectonic plates that are slowly ripping the earth apart, the Danakil Depression is very low in altitude (about 100 meters below sea level), dry (rain is extremely rare) and hot - so hot that it's famous for being the hottest place on earth in terms of year round average temperatures. Moreover, reaching it requires a day long drive through the desert, which is both expensive and exhaustingly uncomfortable. But it's worth the effort, because this area holds invaluable treasures for the avid photographer. 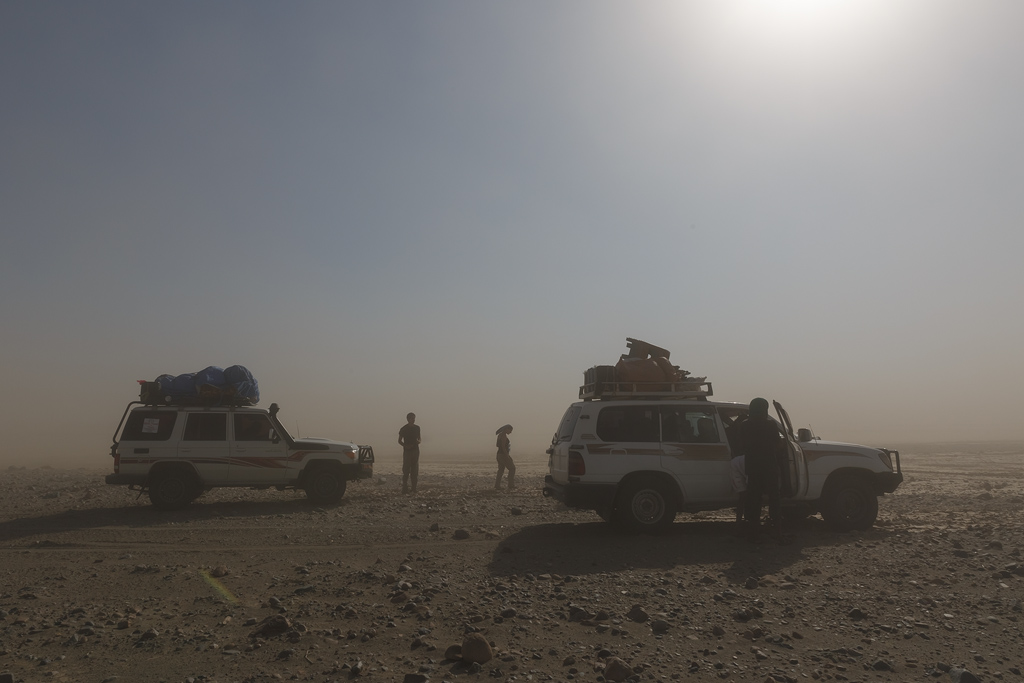 Upon reaching the Danakil after a long drive, one is immediately struck by the vastness of this wasteland. apart of the odd tree and tribal village, there isn't much else around. This makes sense, since little could survive here, but the few humans that do are quite special.

Arid, seemingly Martian red hills, dry, cracked rock formations, wide salt lakes, fluorescent green pools of sulfuric acid, and of course, the mighty Erta Ale volcano are the main photographic attractions in the Danakil Depression. In this article, I will try to survey them from a photographic point of view, and perhaps make you think differently about Ethiopia and its natural treasures. 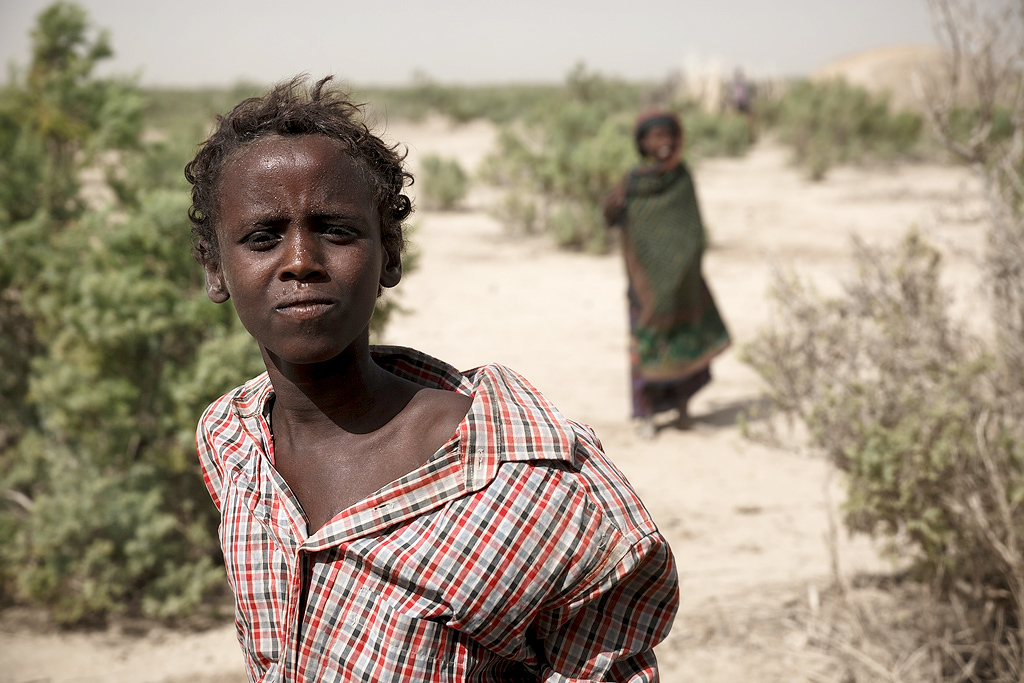 The primary means of interaction between the Afar region and the rest of Ethiopia (and the world) is the endless salt caravans, consisting mainly of camels and donkeys, loaded with heavy bricks of salt - the main natural resource in this area. The caravans are very photogenic, both for their sheer size (the most common response I get to my shots is "surely you've duplicated the camels in Photoshop!") and the landscape they march across.

After a night's sleep under the stars, we started the journey to Erta Ale volcano. I was extremely excited to visit Erta Ale after seeing a few shots from there. The 3-hour hike up the volcano was a bit strenuous, but since it was done at night, it wasn't too demanding for any of the hikers. Nearing the top, I started sensing faint odors and noises. When I reached the campsite, the bright smoke was clearly visible. I couldn't resist taking an image of the distant smoking pit and the clear, starry sky. 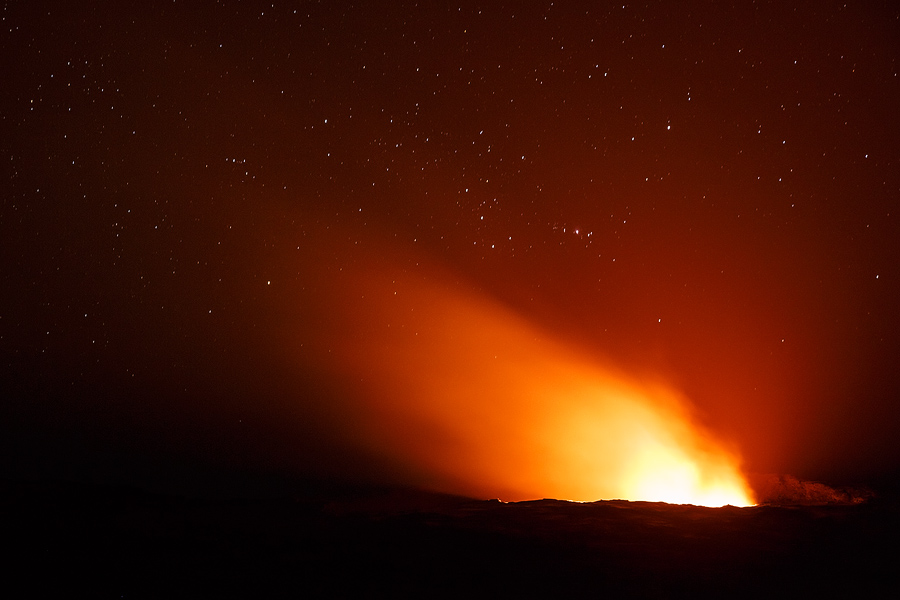 Rising 613 meters, Erta Ale hosts one of only a handful of permanent lava lakes in the world. The name "Erta Ale" means "smoking mountain" in the local Afar language, and it fits this name quite well. It is also notable for being the longest-existing lava lake, present since the early years of the twentieth century.

I knew visiting and shooting this unique place would be very special, but I couldn't quite foresee the level of excitement I would reach upon getting close to it. In my travels I've seen some wonderful natural wonders, but seeing a huge crater, full of red hot, bubbling, exploding lava was one of the most powerful experiences I've had so far.

It wasn't easy shooting the pit itself. The lava is searingly hot and its brightness changes constantly, and the foreground is much darker, requiring HDR technique to reveal its details. Moreover, the pit is very large, and even with a 14mm lens I found it hard to include all of it. If I had tried to step back a bit, I'd have to lose detail in the lava area, since I'd be looking at it from further away. 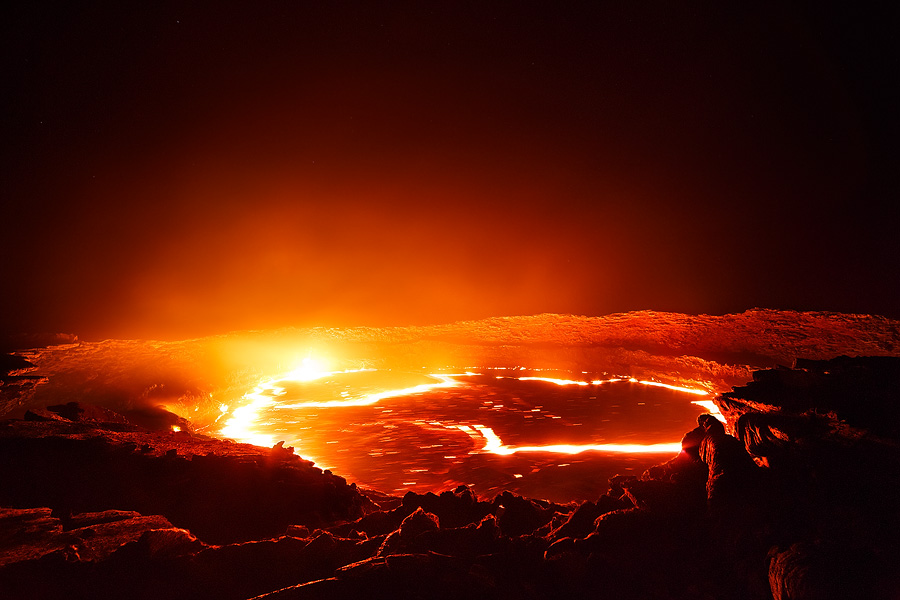 After several trials, I reached a position I was comfortable with, and shot the lava pool together with the serrated volcanic rock surrounding it. The red glow defined the contour of the pit's edges, contributing even further to the hellish look. It can't be conveyed here, but believe me - the smell matched the appearance of the pit perfectly. 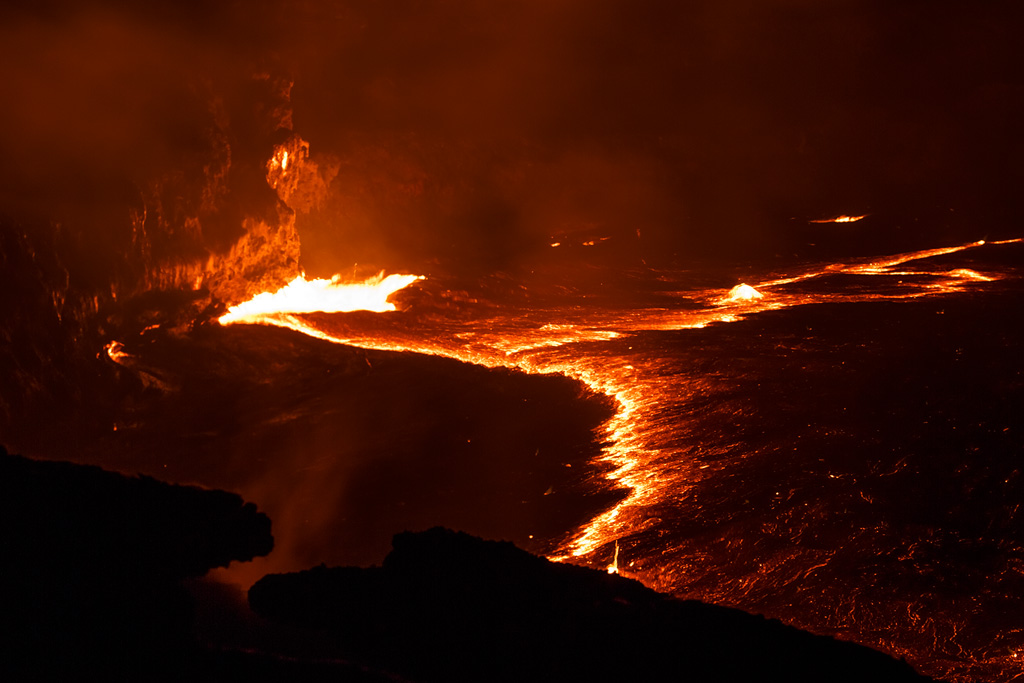 After spending the night in the campsite near the volcano, we began our descent to the jeeps. Within an hour's drive, we reached another spectacular location: the sulfur lake. Colors unlike I'd ever seen before, mineral nozzles spewing hot water, crisp red earth and a feeling of another planet are all offered by the second of the two top locations in the Danakil Depression. What's left to do is put on a polarizing filter and, well, start the photo-party. The formations and colors are endless. 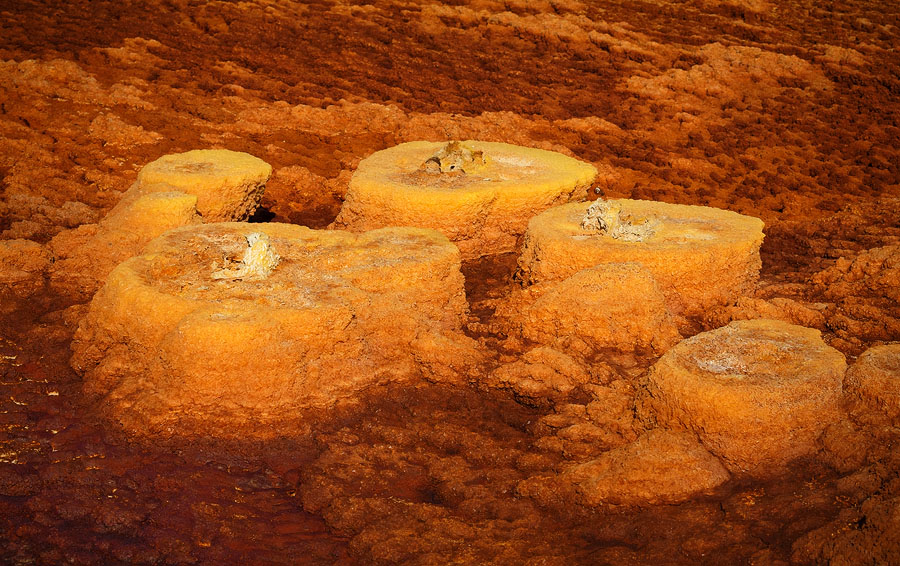 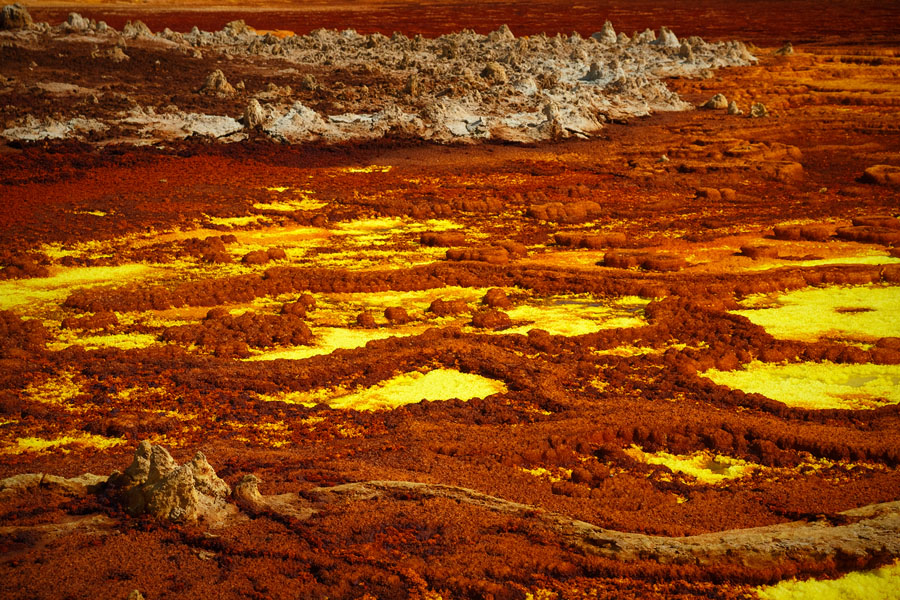 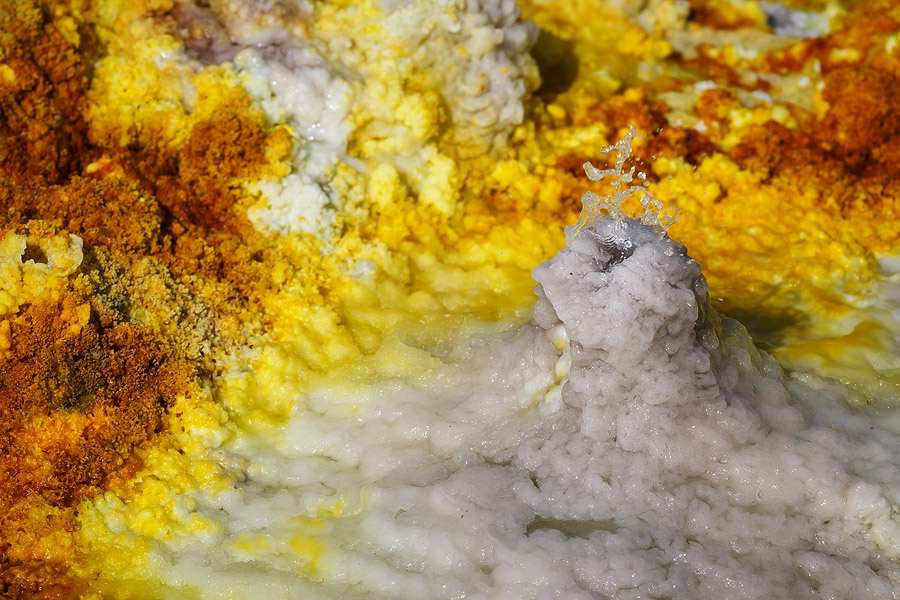 I especially enjoyed shooting the pools of sulfuric acid, with their surreal bright green color against the red earth.

There is much more to see in the Danakil Depression. From tranquil, shallow salt lakes to red, Martian-like hills and rock fields, this region is home to some of the most unique topography on our planet. Hard to reach and inhospitable as it is, I wouldn't visit Ethiopia without stopping there to appreciate and photograph a true hell on earth, but a most beautiful and majestic one. 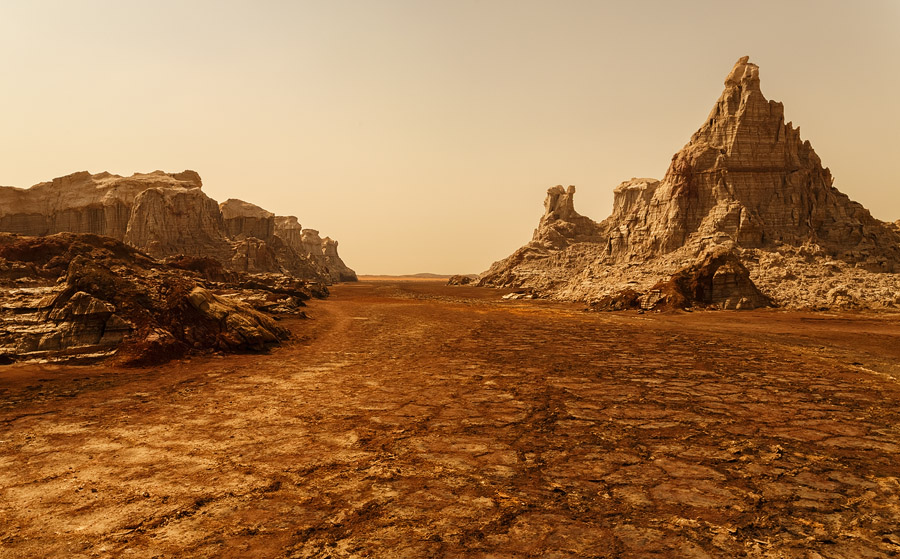