In mid 2019 I traveled to Argentina to shoot the total solar eclipse that took place July 2nd. This was going to be my first total eclipse experience, and I was very motivated to make the most out of it. Northern Argentina is quite a ways from home - about 20 hours in the sky - but several things about this specific eclipse made it worth the effort. First of all, the path of totality was going through the Argentinean desert - a vast place full of photographic potential - which allowed my friend and I to include a whole week of shooting prior to getting to the eclipse (not to mention the potential for the eclipse itself). The desert also meant a good chance for a clear sky, which luckily materialized. Secondly, the eclipse, once in Argentina, was going to be situated very low in the sky (10 degrees at an hour before sunset), which enabled me to shoot it together with the actual landscape, thus creating a more interesting landscape shot compared to a simple closeup.

I used the Time and Date site to find the exact path of totality and the eclipse times. Here is the map detailing the path of the July 2nd eclipse. As can be seen, the eclipse would pass through several comfortably accessible locations, from La Serena in Chile, through the Andes mountains (unfortunately inaccessible due to snow), over San Juan province in Argentina and almost all the way to Buenos Aires.

The decision to shoot in San Juan was made upon several criteria. Firstly, as I've mentioned, the desert sky had good potential to be clear. And indeed, locations from Salta to Buenos Aires were fully cloudy during the eclipse (remember this was the height of the southern hemisphere winter), while San Juan ended up clear.
Secondly, I wanted the eclipse low in the sky, but not too low as to have it obscured by mountains or risk horizon clouds blocking the view. Taking into account a reasonable error margin in how it would really look like, I settled on an area in which the eclipse would appear about 10 degrees above the horizon. That would give it some space above the mountains, but still allow me to include it in a near-far composition. Another reason for not having it too low is that it would essentially force me into a relatively long focal length if I were to achieve any compositional balance.
The decision was thus made to shoot somewhere around Cuesta del Viento lake, near the small town of Rodeo, San Juan province, western Argentina. We would camp in a nice hotel (rooms were long booked out) in the small town of Rodeo, 15 minutes drive away from the lake, and scout the area using a 4X4 vehicle to find a worthy location and composition to shoot the eclipse.

A total solar eclipse is an experience which is hard to describe with words. No matter how much reading and consulting you do, when it happens, it's as if you weren't prepared. Everything turns eerily dark, and the sun's corona - as well as stars - can be seen with the naked eye. Photographically, it's a whole new ballgame, and the photographer must adapt quickly, since the whole thing is over within minutes. In our case, totality lasted a bit more than two minutes, which honestly felt more like 30-40 seconds to me. The whole look of an image (especially light and shadow) can also change, which makes predicting how it will look - and thus planning it thoroughly - more challenging than a regular shot.

I was determined to make the most out of the 2 minutes. I was set up with two DSLRs, as well as a camera drone, and the plan was to take three shots: a closeup of the corona, a near-far landscape composition, and a third shot with the drone. Managing all three in a strictly limited time-frame was one of the most challenging things I've done in my career as a photographer. 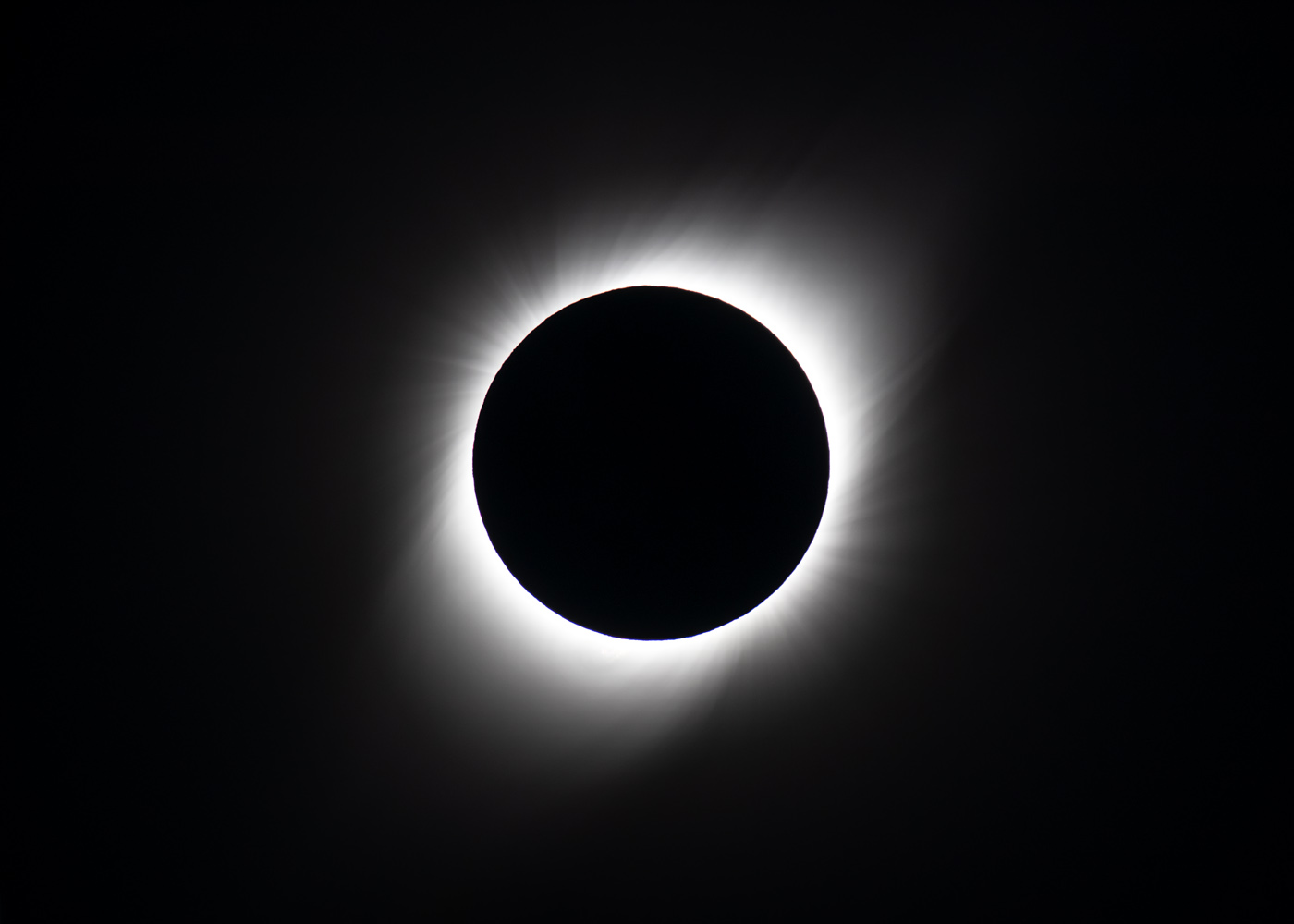 Compositionally, the shot is of course very simple, but the content is captivating none the less, a stunning sight that left even the most experienced traveler lost for words. The symmetry and eeriness of the corona were absolutely mind-boggling. The thing about this kind of shot is that what it shows looks so unreal that it's easy to be unimpressed. Once you experience a total eclipse and realize that this is indeed how it looks, the images feel different.

The more challenging shot was the wide-angle one. To give the viewer a sense of the surroundings, my mission was to include the actual landscape where I saw the eclipse and shoot a near-far composition in a flowing, natural way.

I had previously dreamed of taking an image of the eclipse reflecting in water. The lake was exceedingly calm that day, and so a reflection shot right by the water was a serious option. I had scouted the banks of the lake for hours, but could find nothing that I really liked. Nothing that showed the uniqueness of the area in which I was shooting. The plan thus had to be changed.

The banks of Cuesta Del Viento lake are full of marvelous badlands, with a myriad of shapes and colors. Some were quite frightening to traverse, but after several hours of climbing, scouting and near-death experiences aplenty, I found a composition I liked. 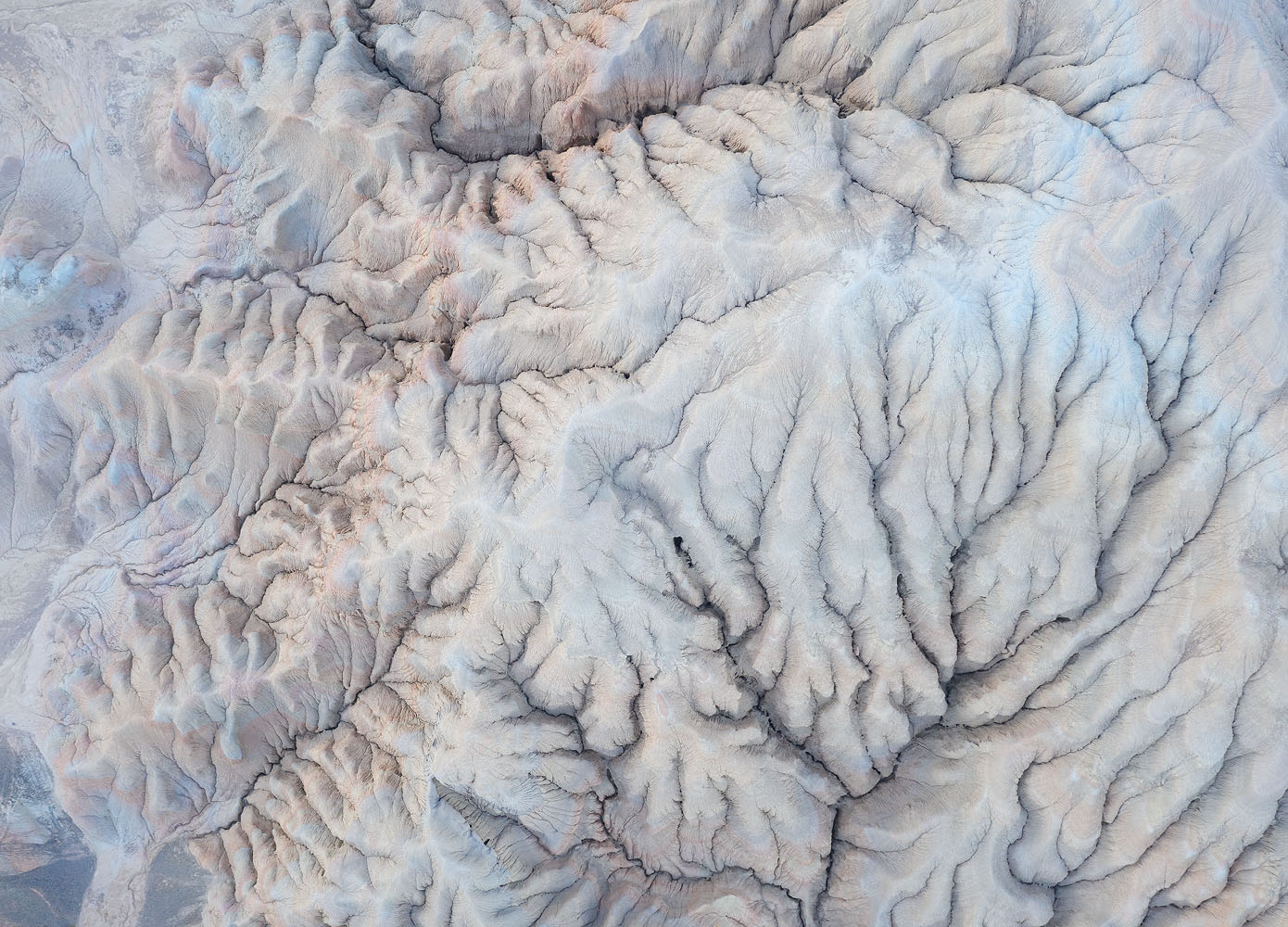 The foreground shows the curves and textures of the badlands, and is framed in quite a pleasing way, capturing the eye while leaving just enough room for the lake itself, under the Andes mountains and the clear sky. The fact that I was able to use my 11-24mm lens and get very close to the ground, accentuated the texture and sense of depth, a main aspect of a classic near-far landscape shot. In addition, the most eye-catching (and closest to the viewer) part of the foreground, the bottom left, balances the eclipse in the top right.

After figuring out the composition, and once the eclipse was happening, I had to quickly adjust the parameters to the sudden darkness. Since this is a 2-image focus stack, I had to use manual exposure so exposure length doesn't accidentally shift when focusing on the background. The parameters were chosen so the image is relatively dark, to create a true representation of what the eclipse looked like. I took the image with my Canon 5D Mark IV, and my Canon 11-24mm at 13mm.

Another thing that jumps into one's eye when viewing this is the bright sky on both sides of the horizon. This reminds us that I was basically shooting under the big-yet-bounded moon shadow, and shows how short and fleeting this moment was.

Before shooting the total solar eclipse with the land cameras, I had taken my drone to the air and "parked" it on a composition I liked (the Mavic II Pro's 30min flight time allowed this without problems), which showed the Cuesta Del Viento lake and the patch of badlands next to the one I was standing on. I had previously planned on a different composition (showing the details in the badlands), but there was no radio contact between the remote and the drone where I had set up with the land cameras, so I had to adapt and find a simpler framing which was doable from where I was positioned.

The upside was, of course, the fact that I did end up getting my reflection shot. While not a perfect reflection (due to wind), this was pretty much a realization of my plan for a reflecting eclipse. I couldn't believe it actually worked! 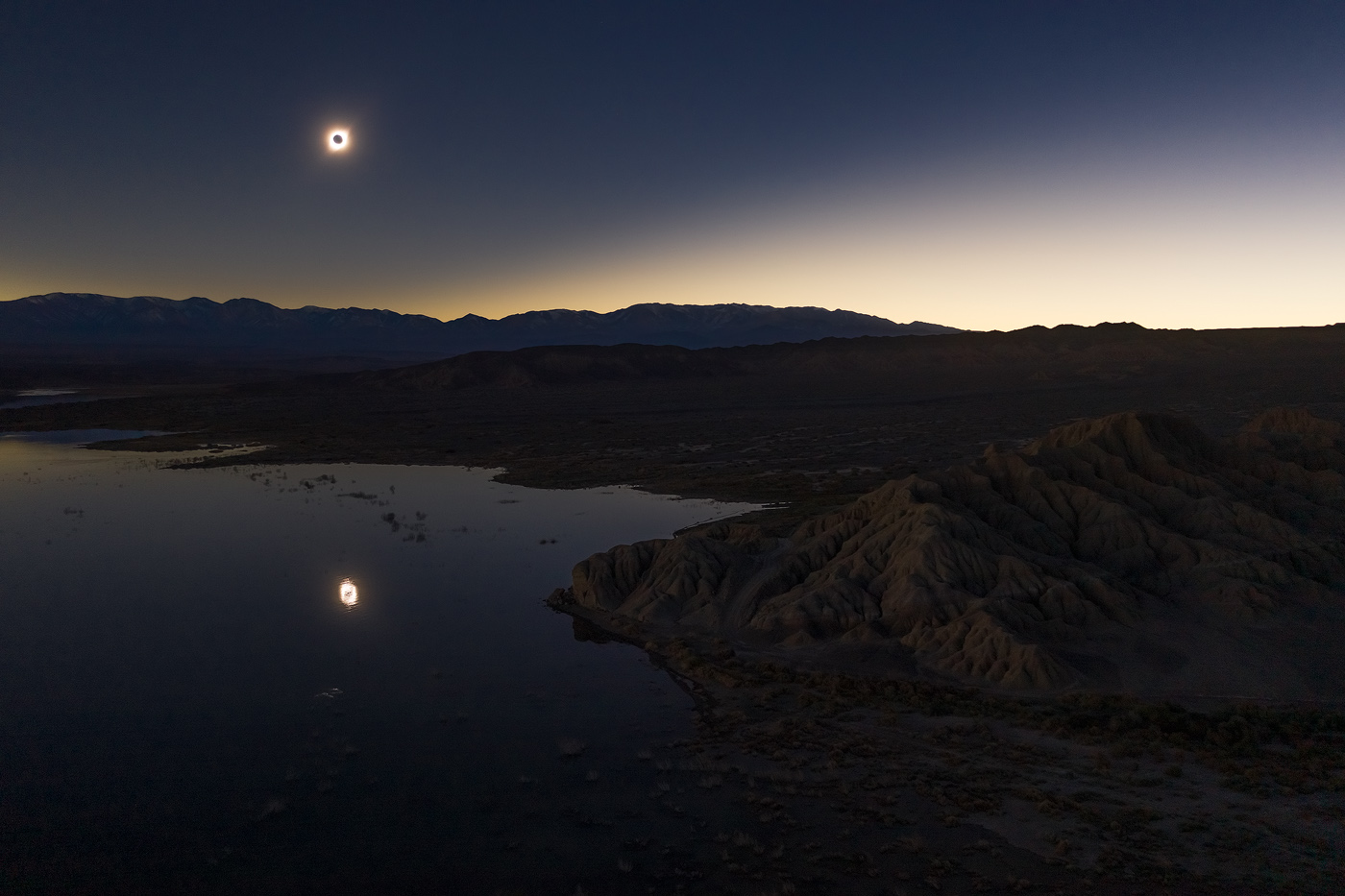 In any case, 3 shots during a 2-minute time frame, one of them focus-stacked, in what was also my first total solar eclipse, is a very decent achievement, and I'm pretty happy with the results. I highly encourage you to experience at least one total solar eclipse in your lifetime - the next decade has several good eclipses around the world. This was a sight I will not forget, and neither will you.