Article: Whatever it Doesn’t Take

Probably as old as landscape photography itself is the notion that a 'good' photographer is one that pushes the physical boundaries, hikes further, climbs higher, suffers harsher conditions, endures pain – all to get to a unique location and be one of the first to shoot it. Many landscapers sneer at those who choose to shoot closer, easier to reach locations – as if the very effort invested in getting to a hard to reach location makes the image inherently better. I have seen images from fellow photographers which were dull, uninteresting, poorly lit and composed – but the photographer was irrationally proud of an image after having to climb 1500 meters with a 20kg bag for it.

Making physical effort does not make your image inherently better, pure and simple. An image is a complex effort, and making your image unique can be achieved in many ways. An image should indeed be unique, but there is absolutely no obligation to make it unique by hiking, climbing or suffering for it. It is but one possible way, but there are others. One can shoot unique angles of known places, shoot by night, shoot in less-shot seasons or weather conditions. One can capture rapidly-changing landscapes like glaciers or volcanoes, and the list goes on. Don't get me wrong: I'm not insinuating that it's senseless to push yourself and photograph hard to reach locations - I do it myself very often. But that in itself will not make your images better, nor should it. If you hike, climb and suffer to get to a wonderful, unique location, and capture a genuinely good, well composed and lit image, then it's a true achievement and you've done something meaningful. But otherwise, you've made the effort for nothing.

Let's look at two images of ice caves. The first was shot in Svínafellsjökull, Iceland, a few hundred meters' walk from a dirt road, while scouting locations for my Iceland Workshops. It was virtually an effortless shot in the physical sense. Yet I really like it: it's quite unique, well composed and lit, and the winter atmosphere is well conveyed.

The second image was taken in Bolivia, at an elevation of over 5600 meters, after climbing a glacier for over 6 grueling hours during of one the most difficult treks I've ever done. Those of you who have climbed in such altitudes know that it's pure agony. The body aches for oxygen, every step is a struggle and you basically end up cursing the day you were born. This is, without a doubt, one of the shots I suffered most for, and it’s truly unique. I also think it's a good shot, better than the former. But I do not think that the fact that I suffered for it makes it better than the first image. 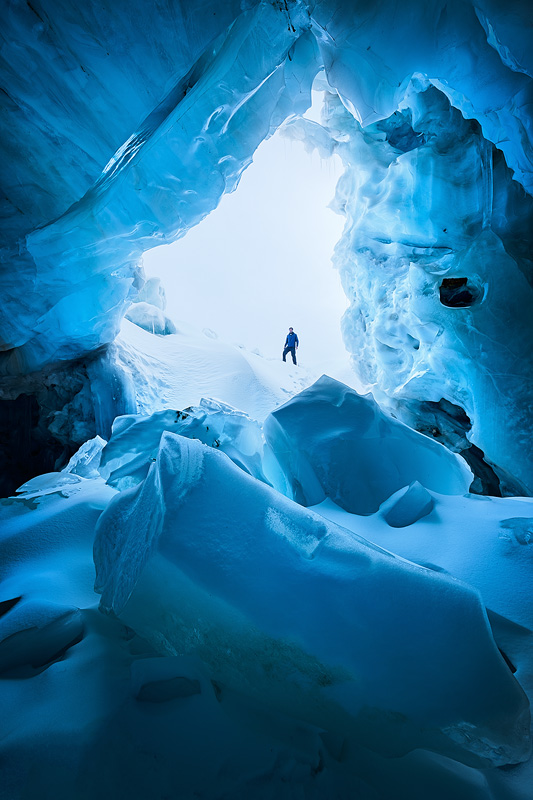 A landscape photographer should do whatever it takes for a shot. I'll hike, climb, suffer freezing temperatures and howling winds, but I always remember that there's much more to an image than the physical effort put in it. And this realization keeps me focused on the true spirit of photography.