In November of 2018 I did a trip to Africa, and spent three days photographing mountain gorillas in Uganda. It had been a long while since I'd last photographed animals. I started my way in the photography world shooting wildlife, but for many reasons I quickly became obsessed with landscape photography and went on to devote most of my time, attention and resources into this field. I have been wanting to revisit wildlife photography for ages, and when two friends of mine mentioned they were going to photograph mountain gorillas, it seemed like a sign that the time had come for me to take the first step back into that world. 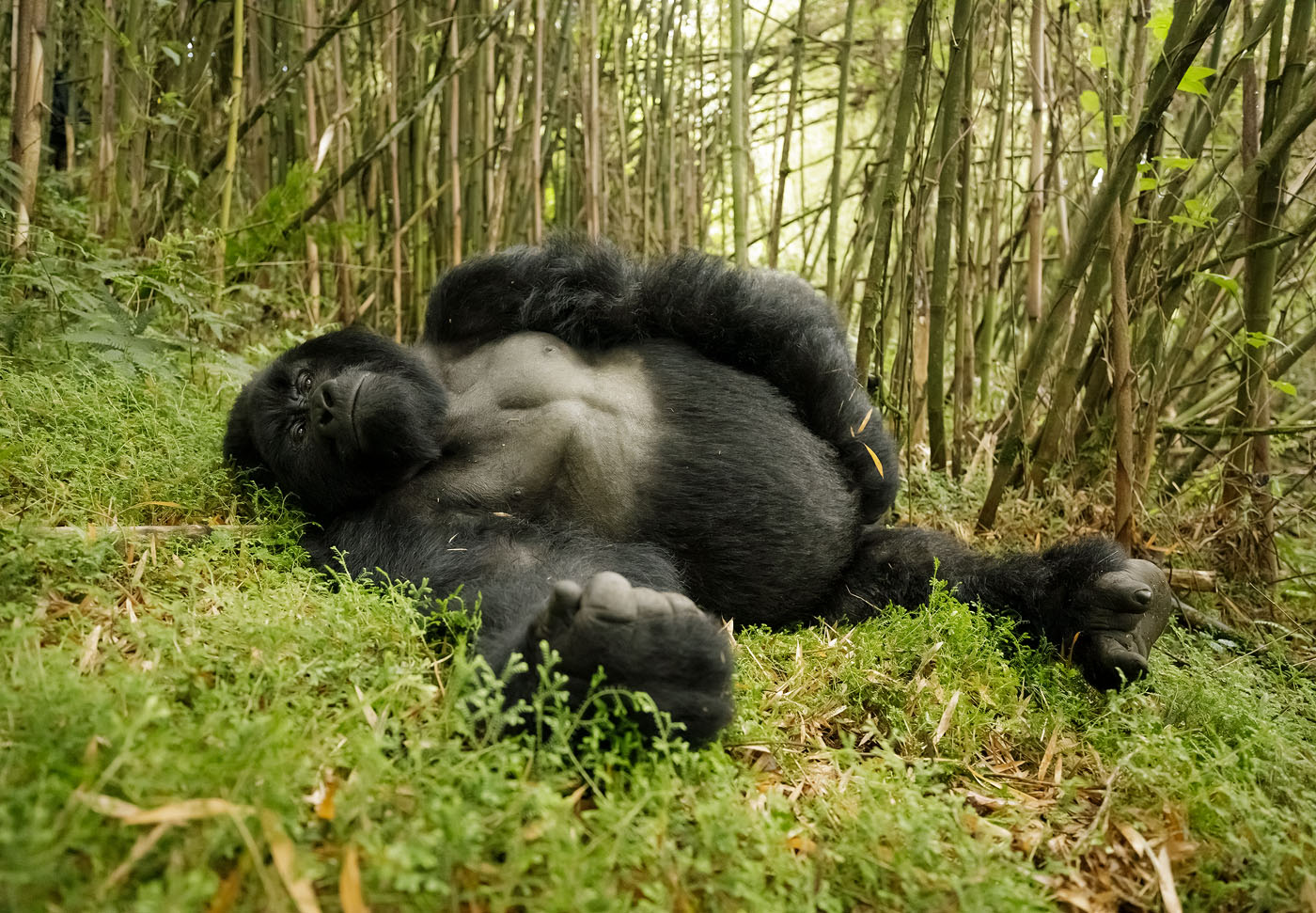 Mountain gorillas are a critically endangered species only found in central Africa (Rwanda, Uganda and DR Congo). After coming back from the brink of extinction with numbers as low as 254, massive conservation efforts have resulted in their numbers slowly rising, and they have recently topped the 1000 figure. Still, these numbers are very, very low and they are dependent on conservation efforts to survive. 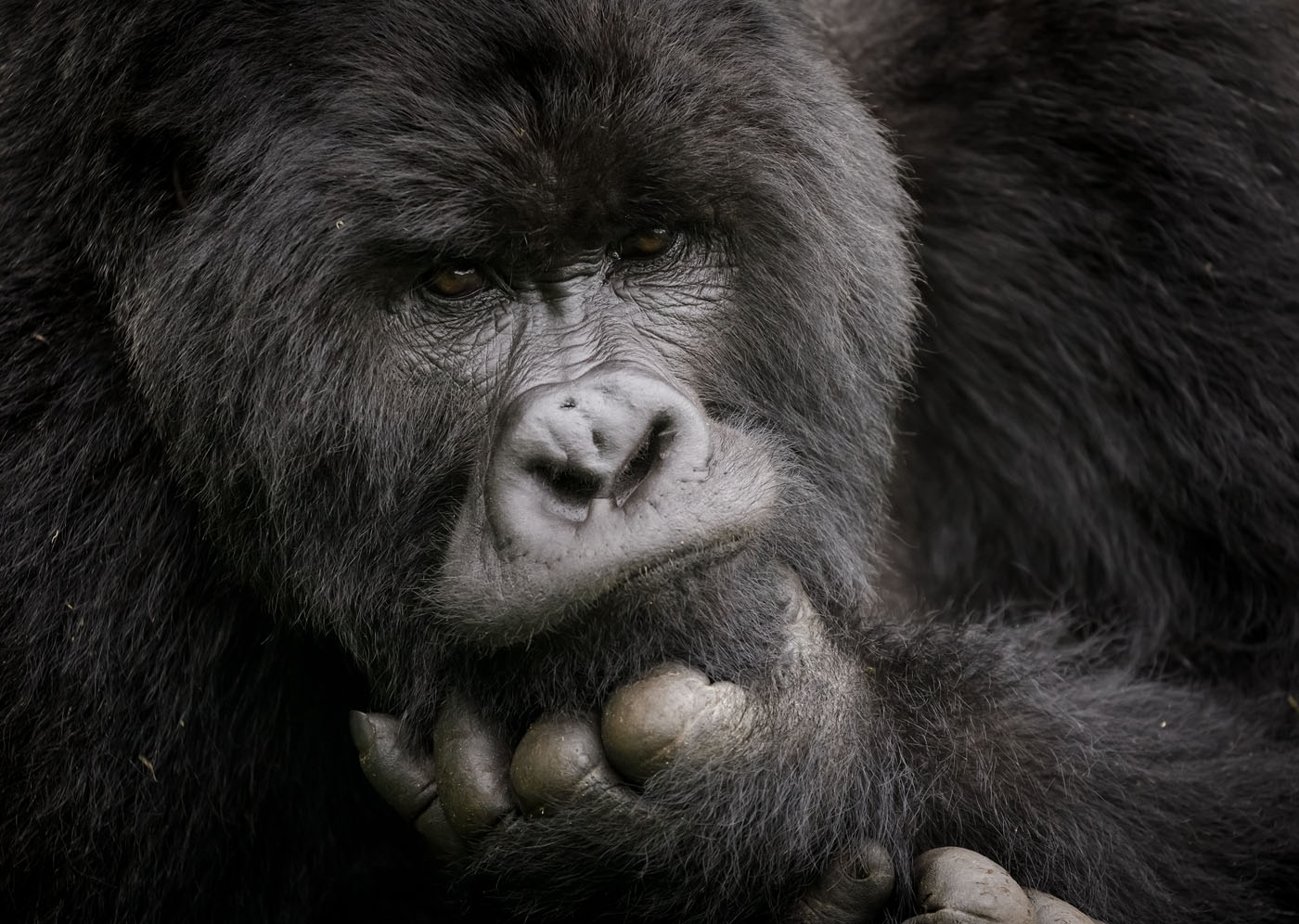 To avoid too much human contact, the Uganda Wildlife Authority (UWA) allows people to be with the gorillas for no more than one hour a day. That hour comes at a cost of hundreds of dollars. Multiply that by the number of shoots you want to conduct, and you get the cost for the permits. Not cheap at all, and keep in mind that hotels, food and a car with a driver have to be added to the cost, not to mention (well-deserved) tips for the gorilla tracking crew. 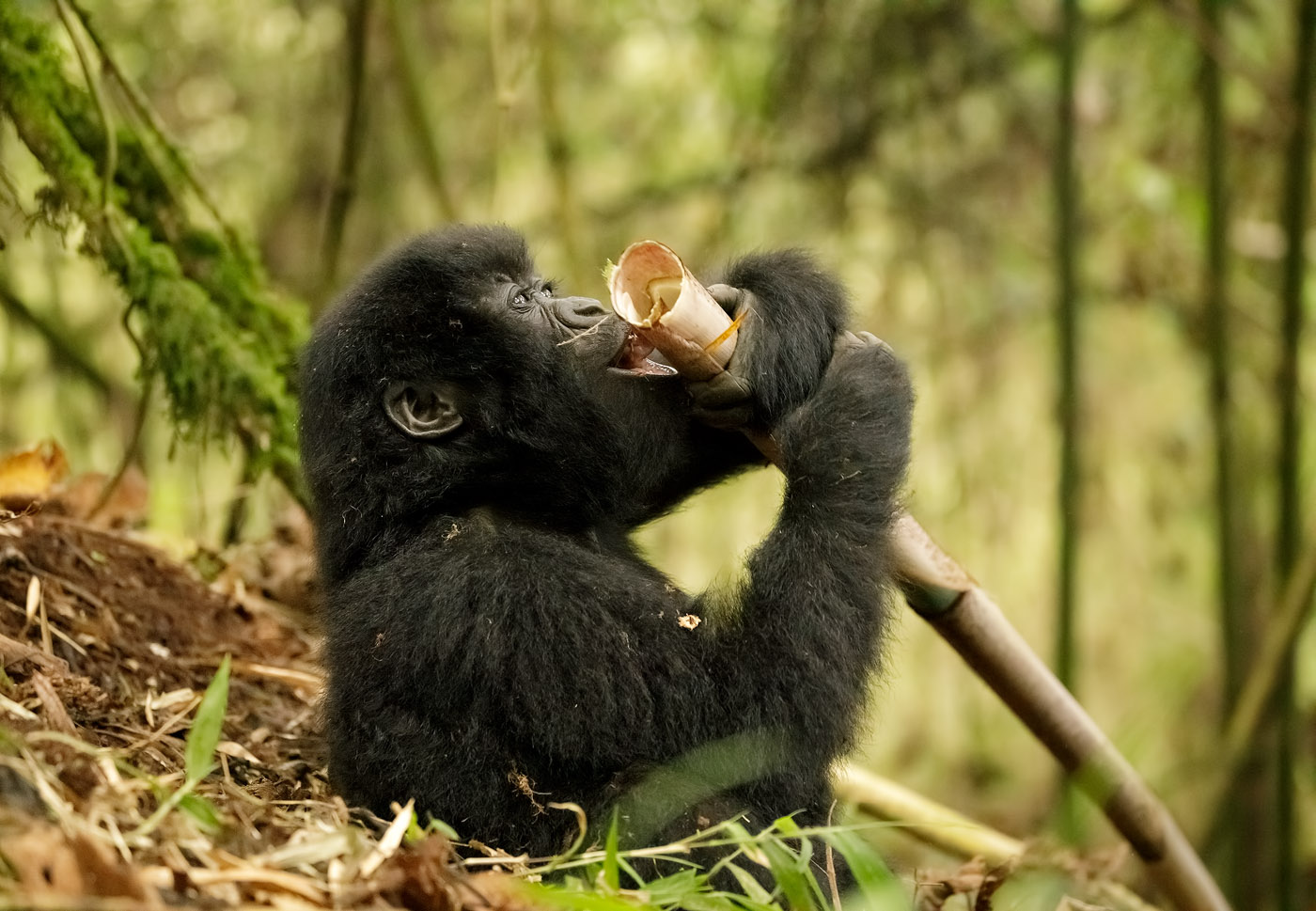 Every morning, after a drive to the park, we met our porters, handed them our photo bags, and walked for a few minutes to reach the ranger's hut. After undergoing a safety briefing, we started the hike. A gorilla tracking team had already located the gorillas, and were in touch with the ranger to let him know where to go.

The hike isn't particularly difficult, but it is uphill. We usually reached the gorillas after 1.5 or 2 hours, depending on the gorillas' location and on the pace of hiking. When getting closer to the gorillas, we could hear the chest-pounding and smell the overwhelming and unmistakable gorilla body-odor (wow).

After years without doing any serious wildlife photography, I was a bit concerned that the learning curve would be too moderate. On one hand, my composition skills have been well trained by shooting landscapes. On the other hand, landscape doesn't move that much or face away, and wildlife shoots are much more dynamic. I made peace with the possibility that some of the precious time with the gorillas would be partially wasted on regaining my wildlife shooting instincts. I knew I had to try to learn on the fly as well as I could, and most importantly, be very focused on the mission and make the best out of my time among the gorillas.

The gorillas are much more incredible in real life than can ever be shown with an image. The sheer size of the silverback males is astounding – they weigh in at over 200kg, without a gram of fat on them. Their heads are as big as watermelons, and their hands are huge. To maintain that bulk, they have to eat about 35kg of vegetation every single day.

The toddlers and juveniles love fooling around, dangling from branches and making funny faces. You are not allowed to approach the gorillas too closely, but that doesn't mean a curious youngling can't take interest and inspect the strange creature with the shiny thing! 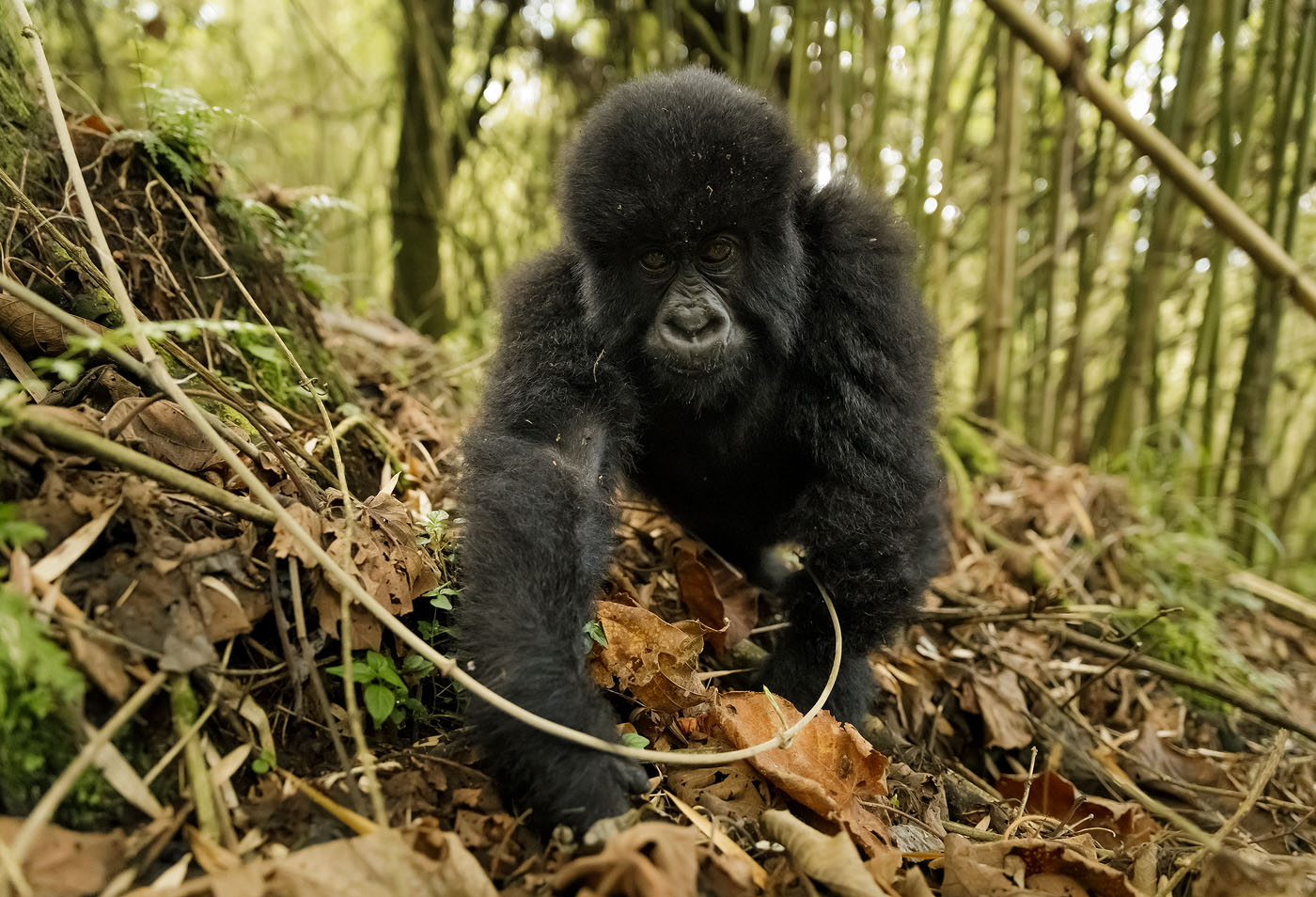 The very dynamic and playful nature of the toddlers often made the situation very chaotic. It was difficult following them when dangling from the branches, getting a focused shot while maintaining good composition. This was the biggest challenge, and I feel I didn't perform perfectly in this aspect. Still, I got a few lucky shots.

The conditions were not easy. A thick cloud cover offered beautiful soft light, but also made it quite dark, with the thick vegetation not helping. To add to this, the gorillas often stay beneath trees. High ISO is extremely important in such conditions – I often found myself shooting at 3200, 6400 and even 12800. Even that was often not enough.

I had brought most of my lens arsenal to this shoot, but found myself mostly shooting with my Canon 70-300mm F4-5.6L IS (for faraway animals and for close portraits) and with my Canon 16-35mm F2.8L III (for closer encounters and for multiple gorillas in one shot). I almost always used wide open aperture, for obvious reasons. 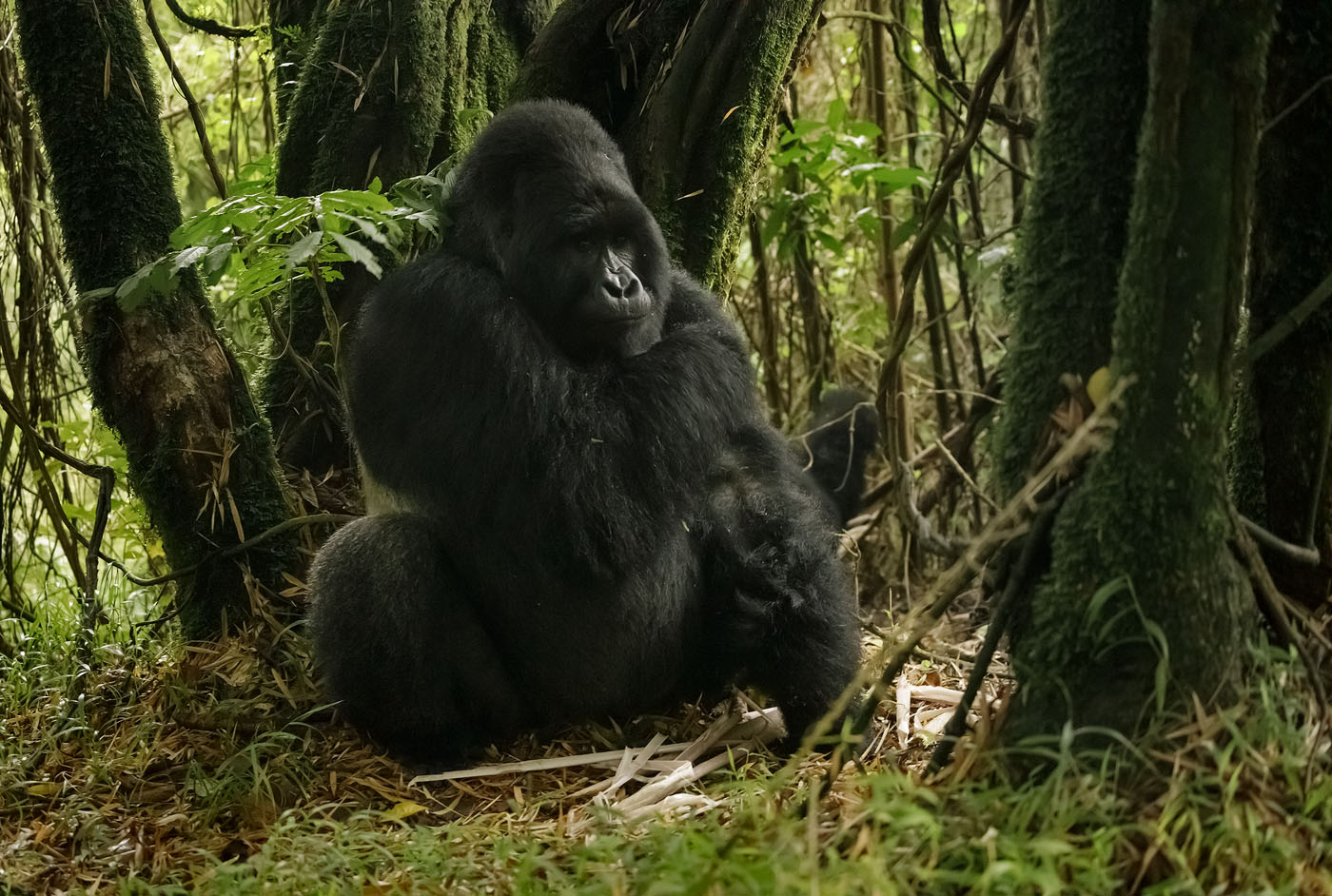 To get interesting shots, good compositions are important. While in landscape photography compositions are relatively easy to pre-visualize, wildlife doesn't always cooperate. It is up to the photographer to find the opportunities when the animals position themselves in a compelling way within their surroundings.

It's important to use the nearby elements, to connect the subject with its surroundings. 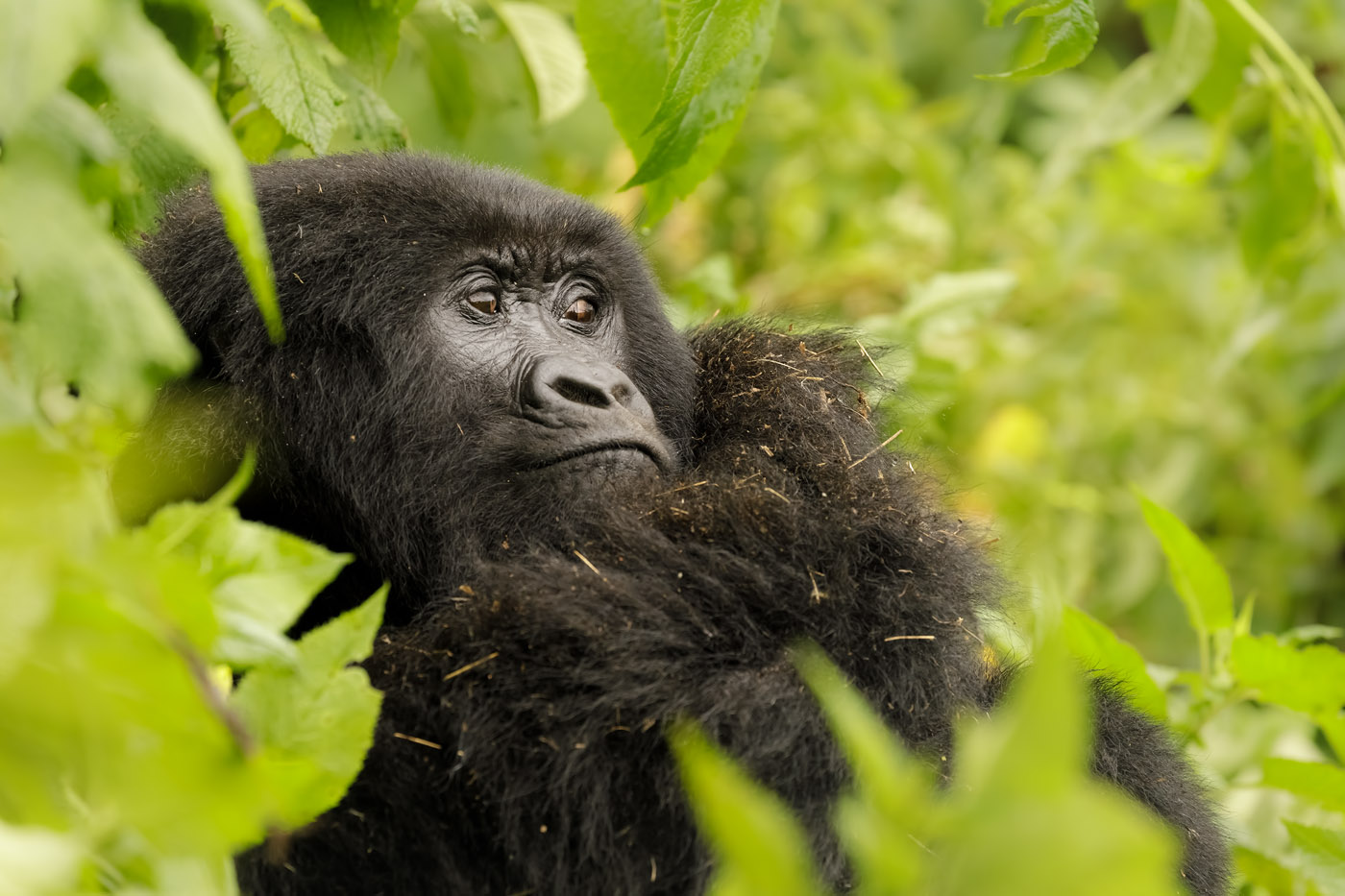 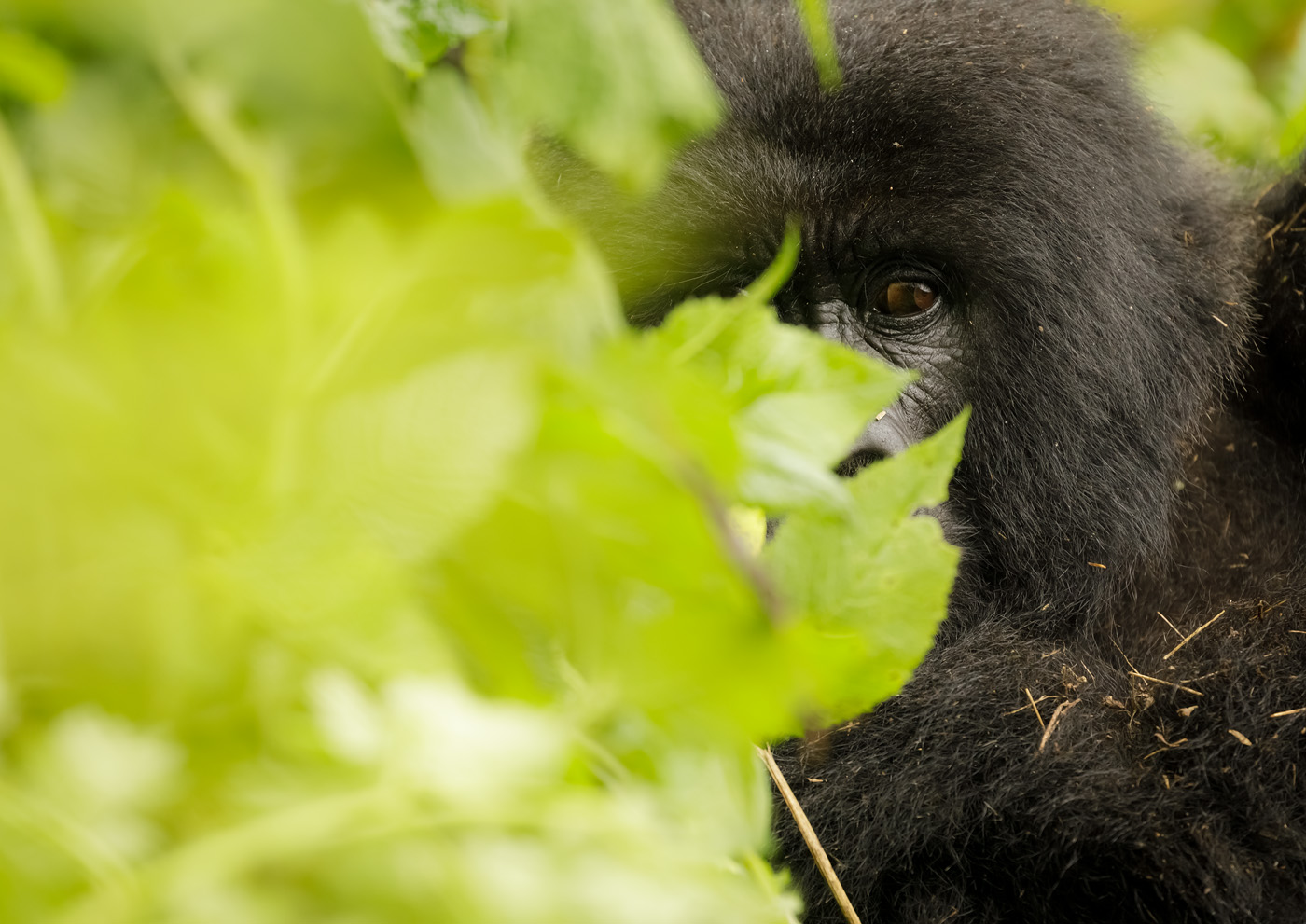 I think the most captivating thing that the gorillas offer is a glimpse into us as a species. In my personal opinion, there is simply no way you can see them in reality and still think we're not related. The look in their eyes, their grumpiness after the rain, their fingerprints – everything about them is so (almost) human. 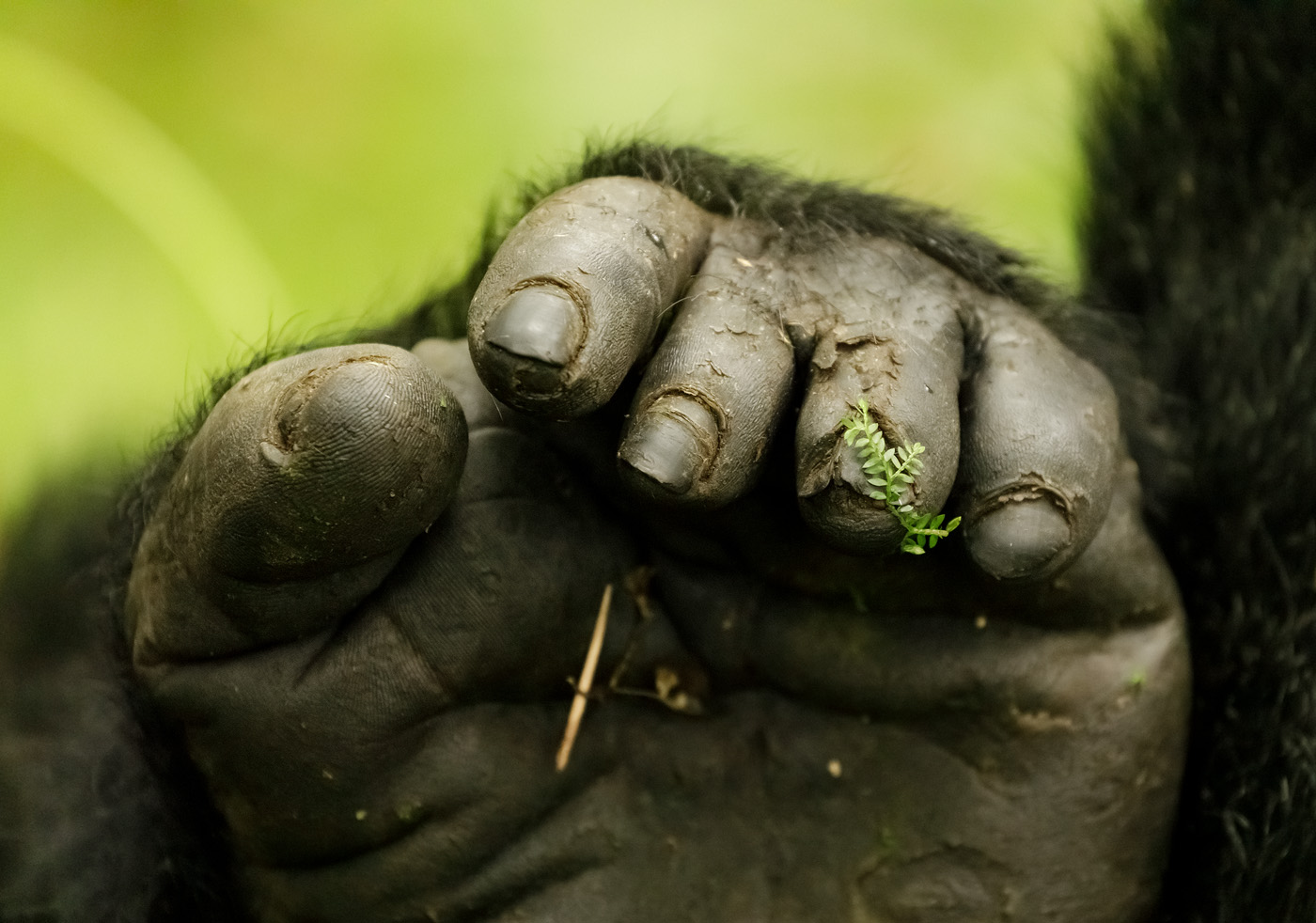 All in all, photographing the gorillas was an excellent experience for me, a perfect return to the world of wildlife photography and one that encouraged me to shoot much more wildlife in the future. The excitement and many challenges kept me focused and helped me give it my best efforts. I hope you've enjoyed the images, and perhaps you will consider making the effort and visiting these magnificent relatives of ours yourself. 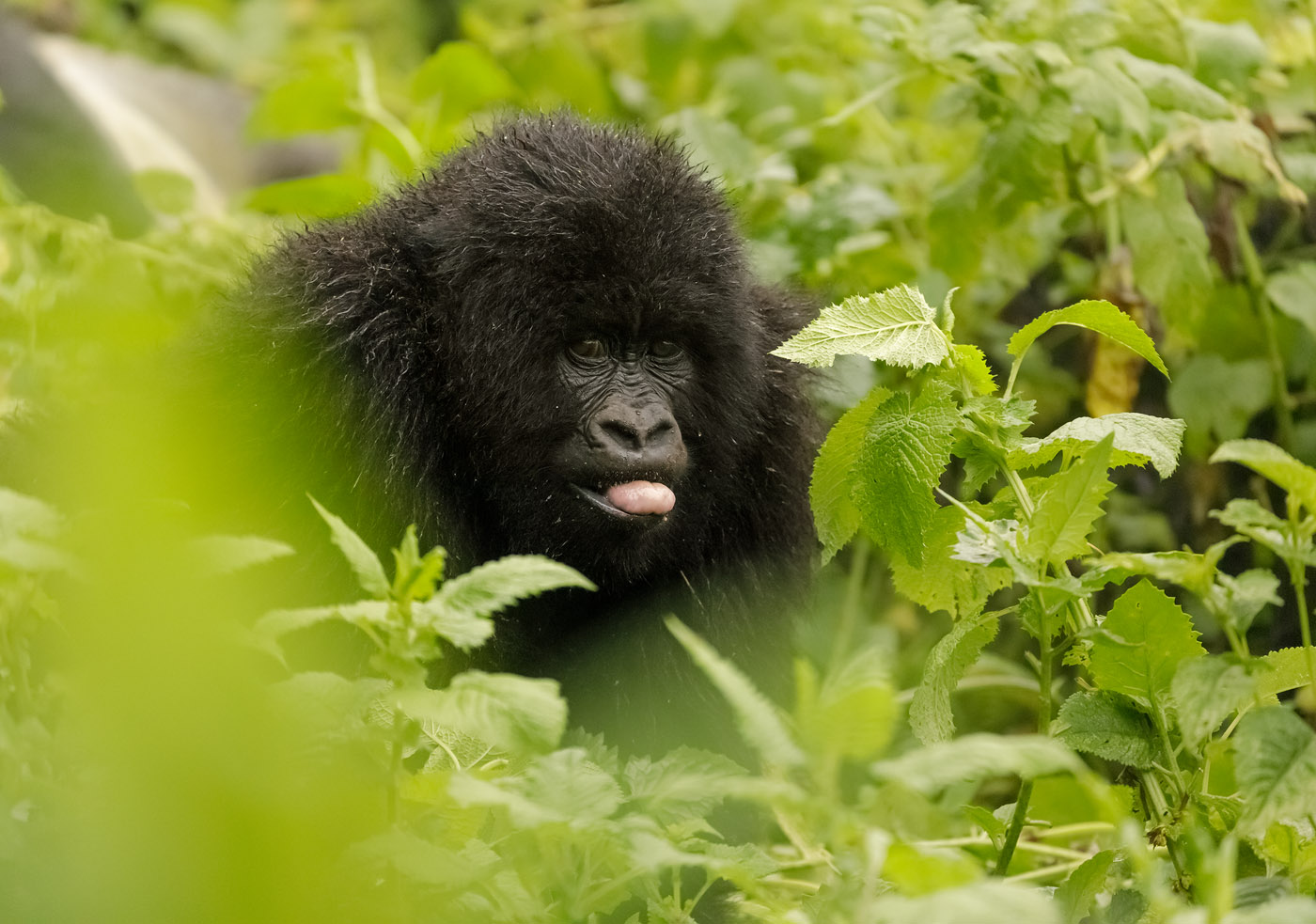